With our Fearless Leader off in the Wilds of Florida this week, we were concerned that we might not be able to make much in the way of progress. We need not, however, have been concerned! Our numbers were sorely depleted -- it was just me, Irena, and Birt. Nevertheless, we accomplished much more than anyone could have expected.

With the extra rack parts our F. L. sent us, we extended the track that the sorter will travel on. We put together a prototype bin to hold the sorted candies, but we encountered a major problem -- we don't have enough of the regular Lego pieces! We must address this problem with our F.L. when he returns.

Birt had to depart a bit early, so for the last fifteen minutes it was just me and Irena. We built a support for the sensor array and connected it to the track. We were even able to test it with the sorter and it was great -- it moves under the sensor array with almost no snagging. We will have to program carefully to ensure that the sorter is exactly horizontal -- or else we'll have to use a 1/4 height separator to raise up one or both ends of the sensor array support, but that would allow ambient light in, which might skew our readings too much. The "addiction" I'd hoped to have happen finally took shape. Laura had some extra time in Friday, and took advantage of our Open Box Policy to refine the platform even further.

I'm so proud of my team. 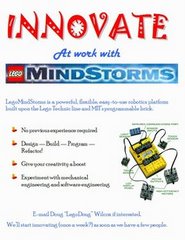